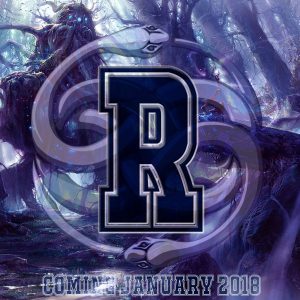 Consuming everything it touches, and making everything good disappear, the Nothing returns in the form of a black cloud. Bad monsters are created from all good creatures, bent on destroying all good in Fantasia. Fantasia’s only hope rests on human children to fight the Nothing.

This winter, join us on our biggest adventure yet to save Fantasia.

The sun had just risen and the whispers of a cold breeze were all that accompanied the faint sounds of the creatures that hid from the black cloud that had appeared over parts of Fantasia only days ago.

“Faster Archer, faster!” Gedeon cried out as he and his galloping horse raced to reach the Ivory tower in time.  Never since The Nothing had been defeated many years ago had residents of Fantasia been this fearful and shocked to see their beautiful world so dark and eerie.

Reaching for his trusty sword Gedeon dodged the giant hand that tried to grab him as he passed and turned the foggy path. Archer came to a complete stop. Thump – thump – thump were the sounds as the young boy was thrown from his horse several meters forward and rolling in the dirt, his black long wavy hair covered his face as he quickly stood up.

With sword in hand Gedeon looked on straight, his bright blue eyes locked on the shadowy figure which was hard to see through the thick fog.

Gedeon took a deep breath and looked up, his small stature was nothing compared to the tall and muscled troll which stood in front of him.

The young boy warrior swung his sword striking the troll’s arm but the thick armor protected it from harm. “Well if it isn’t the young warrior. Do you really think a child like you can save Fantasia?” The troll mocked as he returned a swing of his own sword. Gedeon quickly ducked and turned as the sword missed.

As the tall troll faced away from him for a second Gedoen saw his opportunity to strike. The boy raised his sword and swung it forward with as much force as he could possibly muster.

The troll screamed in pain as he fell on his side. Gedeon had stricken one of his legs tearing a huge chunk of flesh.

As the troll squirmed and rolled on the ground in pain the boy warrior stood over him, pointing his sword directly at him. “Never will Fantasia surrender to evil” With deep breaths between each word Gedeon then raised his sword one last time and then quickly pushed it right on the troll’s chest.

Gedeon sheathed his sword and adjusted his armor followed by whistling calling his horse.

Gedeon mounted and together with Archer they continued their race to the Ivory Tower where he was to report to the Childlike Empress.