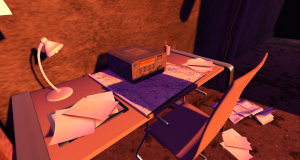 “Hell-O,” the voice of a young girl said out of the radio speaker. “Where is everyone? You guys left me . . .”

The girl was running as fast as she could, shoving her way through the foliage, branches whipping at her, smacking the cheeks of her face, scratching her arms. She ignored that and ran on, feet pounding the ground, legs moving as fast as she could move them. She drew in huge gulps of air, and shoved them out just as fast as she thrashed her arms around, pushing leaves and vines out of her way.

Once, she dared to look behind her when she had heard the sound of a splintering tree, and that was when she stumbled over a moss covered log in her path and was sent flying like Supergirl through the air. She belly flopped on the sodden ground with an audible grunt, and instantly sprang up and ran on.

Somewhere in the dark forest behind her, a tree groaned as it slowly fell, causing a thunderous racket as it smashed to the ground.

The girl hardly noticed as she raced on, weaving around large stones, clusters of shrubs and huge tree trunks, ignoring the stinging swat of twigs on her legs and arms, or the way they caught in her hair and yanked it out in clumps from her scalp.

Then suddenly the ground fell out from beneath her; she was falling. Arms outstretched before her, expecting to land on something hard, but instead she splashed down into a stream.
Stunned, but only for a moment, the child lay there in the water, and then, with a loud gasp for air, she sat up on her knees, coughing.

To her right was the steep embankment she had stumbled down. On the other side was another steep embankment, covered with brush and shrubs, and to each side of her, all around her, the forest towered.

Slowly the girl stood up on shaky legs and staggered a step or two forward, when from behind her there was a huge crashing sound. Something massive had pushed its way through the forest and down the embankment.

Freezing in place the girl held her breath for a long moment. She didn’t want to look, but at the same time she slowly turned to look behind her.

There was a deep impacting thump and splash.

She saw nothing at first but the stream she stood in flowing out from the deep shadows of the forest behind her.
Another thump-splash, and then another, then silence.

The girl stood there looking, trying to see into the gloom of the forest behind her. It was so dark there, and then she realized why it had looked so unnaturally dark, as the shadow moved slowly, something huge leaning down, gold-green eyes looking at her.

It opened its mouth; a huge mouth filled with huge teeth, and let out a thunderous roar.

The girl screamed, and behind her something else screamed as if mocking her. . .

The voice of a child said from the radio speaker in his mind, “you left me.” 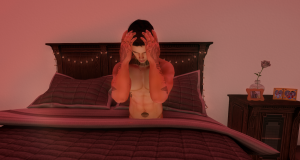 “No,” the man gasped as he sprang out of his nightmare and sat bolt upright in his bed. “No,” he panted as he looked around, confused at first but slowly the realization came to him, dawning on him the way it will when a person suddenly wakes up and has no idea where they are for a moment.

It was two in the morning.

“Damn it,” he sighed as he slowly slid to the edge of the bed, “Damn nightmares.”

Only it wasn’t a nightmare, not really. He had left the girl behind, and while five years had passed since that day they had rescued those children, and left the girl, Aoki Ling, behind on that island, an island inhabited by those . . . things, to fend for herself, it was as present in his mind as if it had been yesterday.

He could still hear her voice coming over the radio speaker, “You guys left me.” It had stabbed him to his soul to hear that, knowing he had left a child behind on that island haunted him to this very day.

If he hadn’t seen them himself, with his own eyes he wouldn’t believe it, but it was real. They were real, the island was real and he had left her there.

Leaning over he twisted the switch to the lamp on his nightstand, turning it on. Blinking his eyes for a moment he glanced at the clock again and his eyes fell on the small square photograph there, resting slumped up against the lamp.

It was a photograph of a girl, Aoki Ling taken for her school yearbook. The same picture the papers had used along with that article they had written about her still being missing, and he lifted it up now and looked it over for a long moment, as he had done countless times over the last five years.

That island was still out there, and so was she. Everyone said he was crazy, crazy to believe what he believed—an island with dinosaurs on it—and crazy to keep looking, but he knew the island was real and that she might still be there alive, maybe. And it was that maybe that gave him hope.

“I’ll not stop looking for you,” he finally said to the photograph before setting it back in place, and then rose to his feet and went to use the toilet. 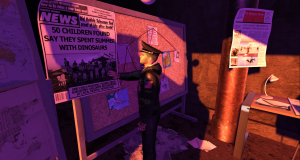